How do I get tickets for The Casbah?

We sell tickets for most Casbah shows through Ticketfly – www.www.casbahmusic.com. Service charges are between $2 – $6 depending on ticket price. When you purchase tickets online, we recommend that you select the will call option – your name will be on a list at the door and you don’t have to worry about your tickets showing up in the mail, or losing them, or the dog eating them, or anything like that – simply show up, ask for your name on will call and you’re all set. Just like that.

For shows outside the Casbah we try to offer tickets at www.www.casbahmusic.com whenever possible. Some venues, such as Spreckels, House of Blues, Belly Up, Observatory, Music Box, among others, have contracts with other ticketing companies and tickets for those shows are on sale via Ticketmaster, Ticketweb, or other ticketing platforms. You can usually minimize the service charge by purchasing direct from the venue. We always try and include a link to buy tickets for shows at these venues on our website.

The Casbah has been open since 1989. Its first location had a legal capacity of 75 and hosted such bands as: Nirvana, Smashing Pumpkins, Lemonheads, The Jesus Lizard, and Rocket From The Crypt.

In the beginning of ’94 we moved just down the road to our larger, plusher quarters and the rest is history. Our “new” location has a capacity of 200+, there is an enclosed smoking patio, a back room featuring a pool table, booths, and a full bar. There is also a music room with a full bar and a state-of-the-art sound system.

The Casbah features live music at least 6, often 7 nights a week with cover charges usually varying from “$0 to $15”. Patrons must be 21 with a valid ID. Our hours , unless otherwise noted, are 8:30pm-2am. We look forward To seeing You!

The Casbah does not accept reseller tickets such as StubHub, Seatgeek, and other platforms at any of the venues where we promote shows. If you purchased tickets on Will Call and need to change the name, please call TICKETFLY customer service from 7AM – 6PM PST at 877.987.6487

What time is the show?

The Casbah opens at 8:30 pm on show nights unless otherwise noted on our site. Generally our bands will kick off around 9 or 9:30 depending on the night of the week. For touring acts, the set times are at the discretion of the headlining artist, however they generally start by 11pm on weeknights and by 11:30 on weekends. For shows outside the Casbah, the set times are determined by the venue and artists, but it is worth noting that our ALL AGES shows (at the Women’s Club, The Irenic, and Soma) are subject to curfew laws and usually start within half an hour of the posted time on our site and generally are over by about 10:30pm. 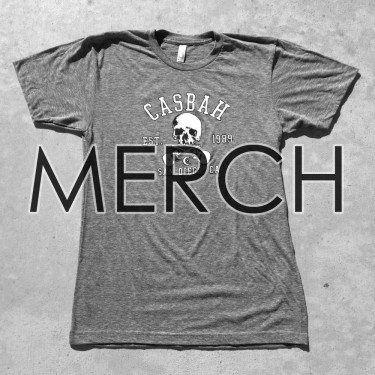