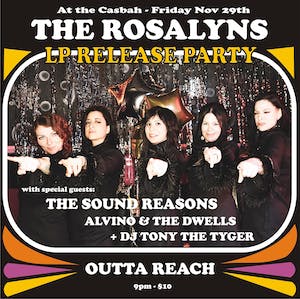 The Sound Reasons, Alvino & The Dwells, DJ Tony the Tyger

The Rosalyns first assembled six years ago to pay tribute to the “girls in the garage” sound of the 1960s—trailblazing bands like the Pleasure Seekers, the Liverbirds, the Clingers, the Daughters of Eve, the Ace of Cups, and the Belles—young women who took up guitars, basses and drums to make some rock ‘n’ roll noise of their own in a field dominated by men. Swimming against the tide, those groups struggled for respect and acceptance at the time, but they picked the locks of doors others later kicked open. For the five ladies in the Rosalyns, the inspiration of those original girl garage rockers runs deep. You can hear it in every note they play on this, their debut album.

Birdy Bardot plays organ, guitar, and harmonica, and sings lead vocals on most of the album, including the electrifying title track, “Outta Reach,” originally recorded by She in 1970, and “Come Back,” a 1966 obscurity by a Florida girl garage group, the Belles. Anja Stax drives the group with her soulful bass playing and backing vocals, as well as singing lead on their version of the Paragons’ “Abba.” She’s also a member of the Loons. Lori Sokolowski plays guitar and sings, taking the lead vocal spotlight on “Hanky Panky” and the Shangri-La’s classic “Give Him A Great Big Kiss.” A multi-instrumentalist, Lori also plays drums in the San Diego-based duo Gloomsday. Amy Gore of Gore Gore Girls fame also plays guitar, and delivers the tough lead vocal on their version of Denise & Co’s “Take Me As I Am.” Last but not least, laying down the driving back beat that helps turn every Rosalyns show into a dance party is Lety Beers of the Schizophonics.

Together in the studio, these five Rosalyns have etched the formidable excitement of their live shows into the spiraled grooves of this album. You best believe I’m in love: L-U-V.