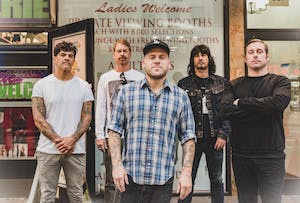 iCal
Google
The Bronx White Drugs Christmas. One of our favorite bands returns for a pre-holiday shingid!

Fifteen years ago, The Bronx appeared in a storm of attack-mode guitars, apocalyptic rhythms, screaming aggression and sneering disdain for the status quo. In 2017, as The Bronx resurface with their fifth eponymous album (and first in four years), the Los Angeles-based quintet has lost none its pugnacity. “The Bronx V,” as it is destined to be known, is as hard-hitting, confrontational and relevant as ever. And while it may or may not sound more grown-up than their vein-bulging early releases, they will not apologize either way. “It has the angst and social commentary that has characterized us from the beginning,” guitarist Joby J. Ford says, “only now the angst is aimed at more than just superficial things and the social commentary is directed at more than just people who like different music than us.” Says singer Matt Caughthran: “We still have a lot to prove to ourselves.” Coming from a band that has persevered for a decade and a half, that sounds outlandish. Moreover, they've led dual lives for the past eight years, maintaining an alter ego as Mariachi El Bronx that as is as true to that form of music as their hardcore is to the punk ethos. Prove themselves? Yes, that’s the way the Los Angeles-based quintet thinks and works. “The Bronx V” is out Sept. 22. The band —Ford, Caughthran, guitarist Ken Horne, bassist Brad Magers and drummer David Hidalgo Jr. (replacing Jorma Vik, who departed the band in 2016) — recorded the album over five weeks with renowned producer Rob Schnapf, whose wide array of gear allowed them to add considerable nuance to their blistering guitar volleys. “Instead of having one thick wall of guitar, there are a lot of different colors, different sounds, the result of using a variety of guitars and amps,” Horne says. “Overall, it’s still heavy but catchy.” Adds Magers: “He was perfect for us. Somehow, we sound clean yet dirty.” Years back, Schnapf was slated to work on the third Bronx album and the Mariachi El Bronx debut, but that was scotched when the band was dropped by their label. The producer was happy it finally happened. “They know the drill,” the producer says. “It’s not like anybody had to coax anybody. And it ended up being two oddball amps that gave the album its sound.” More than sonics, though, “The Bronx V” finds Caughthran at his most full-throated and direct, addressing themes ranging from the national consciousness to his own personal struggles and mid-thirties malaise. “One of the main hurdles was kicking myself out of the depression I’ve been battling for two years,” he explains. “I don’t want to over-dramatize it, but I felt pretty bleak for a while. I didn’t want to just write about relationships — I wanted to write about how difficult it often is to keep your head on straight. Sometimes it’s a daily battle. I’m a lucky guy, but I’ve been down some dark holes the past couple of years, not knowing whether I was capable of being the person I thought I could be.” That feeling is referenced in “Channel Islands”: “Last chances dancing in the moonlight / goodbye is written in the stars / I saw myself above the ocean / running outta time / running outta time,” Caughthran wails, looking his own self-doubts squarely in the eye. But while confronting his own demons and the notion that “maybe I’m not cut out for making it to the second part of my life,” Caughthran says he also looked externally for inspiration. “The world is on its ass,” he says bluntly. The pulse-quickening “Broken Arrow” tackles phobia over religion; the anthemic “Cordless Kids” suggests “our future’s buried in the past;” and “Kingsize” broaches the idea of knocking everything down and starting all over, because “The summer of love / is divorced.” “The world is both sad and hilarious right now,” Caughthran says. “It’s a funny time to be an actual living human being with a heart and a conscience. I am not a fan of people shutting their doors and closing everything off. But as an artist, it’s actually a great time to create.” Adds Ford: “We never wanted to be a political band, but how can you not make some kind of statement with the things that are going on around us?” he says. “I think we arrived at something that is conceptually correct.” Lacking none of the band’s typically pugilistic fervor, “The Bronx V” lands punches exactly where they’re aimed.