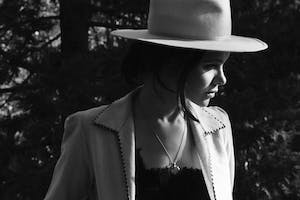 Caught halfway between the dark swoon of pop-noir, the raw rasp of soul music, and the honest punch of Americana, Suzanne Santo's Ruby Red tells the story of a singer, songwriter, and mul-ti-instrumentalist who, more than 10 years into an acclaimed career, is turning a new corner.

Produced by multi-platinum Grammy nominee Butch Walker (whose Los Angeles recording stu-dio gives the album its name), Ruby Red marks Santo's first release as a solo artist. For the past decade, she's spent most of her time fronting the Americana duo HONEYHONEY, whittling her banjo, violin, and vocal chops into sharp shape along the way. Here, she takes a break from that longtime gig to explore something different, creating a moody, sexually-charged album filled with organic instruments, distorted fiddle, Walker's powerful electric guitar, and Santo's most stunning vocal performances to date.

"I think I started writing songs for this record long before I realized that I was writing songs for this record,” said Santo. “I’ve identified with a collaboration for so long that the thought of taking a leap into the depths of my own music and having no idea what that would look like, definitely came as a shock. I was getting lazy and not finishing the tasks at hand like I really wanted, deep down, to be able to do. Writing this record was bewitching in a way.”

Before they collaborated on Ruby Red, Santo made multiple appearances on Butch Walker's eighth album, Stay Gold. She joined him on the road, too, singing harmonies and playing violin, guitar, and banjo during a nationwide tour in 2016. During breaks in her touring schedule, she began diving into a different type of songwriting, looking to diverse albums by Erykah Badu, Da-vid Bowie, Townes Van Zandt, and the Alabama Shakes for inspiration. For years, she'd always been somebody else's bandmate. This was a time to explore her own identity. To write her own music. To ignore genres and defy expectations. To determine what, exactly, she wanted to say. . .and find out the best way to deliver it.

“Once Butch acquiesced to producing the record, I had an ‘oh shit!’ moment where I realized that I needed to really show up,” continued Santo. “I had to have songs that were finished, let alone good enough. I couldn’t stop and I wrote all day every day to finish the songs I’d started years ago as well as the few that presented themselves in the 4th quarter. I took long walks in my neighborhood and listened to demos on my cell phone and worked out lyrics. I would also wake up in the middle of the night with new ideas and would get up and write them down or rec-ord them. It felt like the songs were seeping through the cracks of my mind and out of my mouth, without much of my consent. I think art is a channel, connected to something much greater than we are and I feel honored when it picks me from time to time."

Ruby Red is an album about love, life, and lust in the modern world. Moody and melody-driven, its 11 songs range from "Handshake" — the record's epic opening track, equal parts Southern-gothic anthem and slow-burning soul ballad — to the driving "Ghost in my Bed," which pairs an explosive chorus with layers of mandolin, fiddle, and piano. Meanwhile, tracks like "Better Than That" focus on little more than Santo's voice: an electrifying, elastic instrument that's capable of both vulnerability and ferocity.

"It was incredible to work with Butch. He facilitates a great time and an artistic environment that orbits solely around what’s best for the song, which is so rare in a business full of egos. Butch and this environment liberated and enabled me to work in a way that I never knew I was capable of."

Although Ruby Red marks the start of something new, it doesn't signify the end of Santo's long run with HONEYHONEY. Santo will join bandmate Ben Jaffe in the television series The Guest Book, whose episodes feature the two musicians in acting and musical roles. The show premi-eres on TBS during the latter half of 2017, adding another bullet point to the acting career Santo launched years before HONEYHONEY's formation.

Santo's story is still unfolding. This is the newest chapter, bringing with it a track list that doubles down on the songwriter's strengths and stretches her limits. There will be more chapters to ex-plore. More colorful stories to tell. But for now, Suzanne Santo's future is looking Ruby Red.

"This record is so fucking sexy, I can't deal,” said Walker. “Proud to have been in the room when these songs were going down. Put it on and turn out the lights."