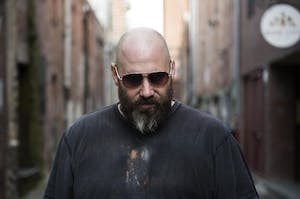 considered one of our generation's greatest lyricists. His gifted wordplay creates vivid

narratives to instigate as well as inspire, but it often derives from an accumulation of

public disdain and personal turmoil. Dubbed the "forefather of indie-hop” (a subgenre

battle circuit. This was coupled with the waves he was causing in the newly burgeoning

spoken word scene. Despite having no official distribution or label support, Francis'

which caught the attention of labels worldwide. With his first studio album, Personal

Journals, Francis daringly set aside the more boastful side of rap by catering to his

poetic leanings and scathing socio-political commentary. By 2005 Sage Francis was the

selling artists of his genre. Rather than abandon his day-to-day grind at the helm of

SFR, he channeled all of his newfound resources into it, allowing the label to expand in

continuing to push buttons from his New England home. New projects are in the

works. A new life is in progress. Don’t…poke…the beard.