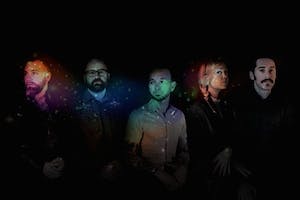 Taking their moniker from the 1976 Neil Simon-scripted comedy of the same name, Bloomington, Indiana's Murder by Death deliver a heady blend of brooding and erudite balladry and orchestral indie rock that draws from country, folk, rock, and musical theater. Citing influences like Johnny Cash and Nick Cave & the Bad Seeds, the group emerged in the early 2000s in a blaze of dark post-rock and gothic Americana -- they often refer to their style as "whiskey devil music." The band's relentless touring and distinctive sound earned them a dedicated, almost cult-like fan base, who swooned to the ominous tones of career highlights like In Bocca al Lupo (2006) and Bitter Drink, Bitter Moon (2012), reveling in the menacing, but rootsy and captivating tent-revival atmosphere.

Murder by Death first caught the attention of Thursday's Geoff Rickly while playing a gig together one night in their hometown of Bloomington, Indiana. Rickly promptly brought the band, then called Little Joe Gould, to the attention of his friend Alex Saavedra (Eyeball Records owner), and the group was signed immediately. The band comprised vocalist/guitarist Adam Turla, drummer Alex Schrodt, bassist Matt Armstrong, cellist Sarah Balliet, and pianist Vincent Edwards. They issued a 2001 self-titled EP as Little Joe Gould before the band eventually decided to change its name to Murder by Death. The bandmembers felt the new name better represented their baleful sound, which combined elements of artists like Nick Cave & the Bad Seeds, Johnny Cash, and the Decemberists.

Their first full-length, Like the Exorcist But More Breakdancing, was released on Eyeball in August 2002. Touring early on with bands like Cursive, Interpol, and the American Analog Set, the band did a summer 2003 split with Volta Do Mar before following up that fall with the well-received Who Will Survive and What Will Be Left of Them? The record was something of a concept album based around the Devil waging war on a small Western town (and the title was another cinematic reference, referring to a slogan used to advertise the horror classic Last House on the Left). A benefit 7" appeared at year's end in memory of Ten Grand's Matt Davis, and the band continued to turn heads nationwide on tours with the likes of Lucero, the Weakerthans, William Elliott Whitmore, and Rasputina.

Edwards amicably parted ways with the group in mid-2004 to go back to school, and when his touring replacement also left by the year's end, the remaining members of Murder by Death decided to just carry on as a more rock-oriented quartet. Balliet, though, picked up keyboard parts along with her cello. After extensive touring, the bandmembers went back to college for a bit while writing their third album. Murder by Death eventually issued In Bocca al Lupo on their EastWest imprint, Tent Show Records, in May 2006. Another concept album, this one was produced by J. Robbins (Against Me!, Dismemberment Plan), and explored themes of sin and redemption, inspired in part by Dante Alighieri's The Divine Comedy. Touring continued through the summer, including a headlining stint with Langhorne Slim opening.

Red of Tooth and Claw

In March 2008, Murder by Death released Red of Tooth and Claw on Vagrant Records. The band followed up again in 2010 with its fifth studio album, Good Morning, Magpie. Two years later Murder by Death returned with Bitter Drink, Bitter Moon, which found the band taking part in a crowd-sourcing campaign through Kickstarter for the vinyl release of the album. The campaign would find them becoming the third highest-earning band since the site launched. The album was eventually released on CD and via digital download by the respected Chicago indie label Bloodshot Records. The band turned to crowd-funding again for 2015's Big Dark Love and 2018's The Other Shore, both of which were also released on Bloodshot.