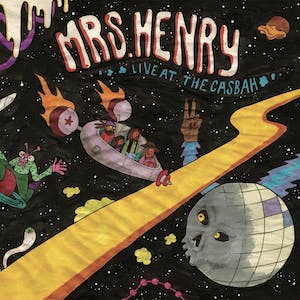 iCal
Google
Mrs. Henry - Live at the Casbah album release party. Join us for a night to celebrate our favorite nightclub in town!

Bands like Mrs. Henry aren’t manufactured. They are forged on inconsolable stretches of American highway. Ignited by a consciousness-changing West Coast tour in 2015, Mrs. Henry spent the last three years faithfully converting the West. Congregating a cult following, the band has earned an unrivaled reputation atop their already well-established individual credits (Howlin’ Rain, The Schizophonics, The Silent Comedy). Endurance is their vocation and bringing unapologetically live music into a new era is their mission. With an intergalactic boogie and a torrent of improvisation, Mrs. Henry is burnin’ nitro soul and it’s all for the sake of rock n’ roll.

With the 2017 release of Vol. II (Blind Owl), Mrs. Henry completes their ambitious two-volume debut, documenting the inception of a band and the solidification of a brother- hood. Nominated for Best Live Performer by the San Diego Music Awards, the Certified 100% Analog double album was recorded straight to tape without second-guessing or second chances. Building on the momentum, Mrs. Henry closed out the year with a sold out tribute to The Last Waltz in the process takingtheir rightful place at the center of San Diego’s music scene.

Summer of 2019 highlights the release of Mrs. Henry presents THE LAST WALTZ - the 4 vinyl set, 2 hour plus concert recording and 40 minute documentary premiered at the Oceanside International Film Festival on August 4th. Two years in the making, the live album and documentary has been celebrated internationally for its homage to the Band’s iconic 1976 concert event, showcasing the talents of the San Diego music scene past and present. The new single, "The River," engineered by Eric Bauer (Thee Oh Sees, Ty Segall, Heron Oblivion) at the Mansion in San Francisco, CA shows the band moving forward full throttle as songwriters, embracing their cosmic roots rock n' roll and explosive live performance. With a new live album scheduled for release in January followed by a studio album in summer 2020, Mrs. Henry continues to define rock n’ roll with spontaneous abandonment.