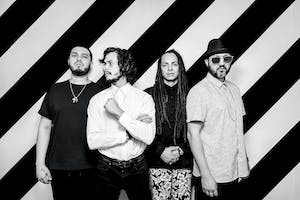 “We instantly connected with Los Rakas and their way of exalting the underclass even through their name,” Enrique explains. Los Rakas name is drawn from the word “Rakataka”, which is a derogatory way of describing the Afro community in Panama. “I think we are all exploring identity. The deeper you look into it the messier it gets, and the more systemic racism has impacted how we see our world and ourselves.”

Panameri’kana is a play on the concept of Panamerican - everyone on this continent share some common identities. “We are Panamanian and Panamerican,” Enrique says. “The reggaeton rhythm in Panamá is just as much American music as any americana music.”

Latinx rock'n’rollers and activists, Making Movies, released their third album ameri’kana May 24th and its apparent why Rolling Stone says, “this band is breaking down walls in the United States.” Collaborating with legends Los Lobos Rubén Blades and the late Lou Reed has NPR Music placing 'ameri'kana' on its Best Music of 2019

Salsa icon Rubén Blades has joined forces with the band to release three singles on ameri’kana: No Te Calles, Cómo Perdonar (ft. Flor De Toloache) and Delilah a song co-written by Blades and Lou Reed. Grammy.com called Delilah an “epic musical collaboration brought together by the topic of immigration” and NPR Music placed “No Te Calles: on its Best Music of 2019 (so far).

The band has toured extensively, appearing with the likes of Arcade Fire, Los Lobos, Hurray For the Riff Raff, Bomba Estereo, Galactic, Jesse & Joy, Flor De Toloache, Thievery Corporation and will be joining Rubén Blades for some tour dates fall 2019.