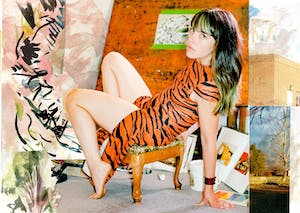 iCal
Google
“We should try again to talk,” Frances Quinlan writes. It not just a lyric—it’s a suggestion, a warning, a plea, a wish.

“We should try again to talk,” Frances Quinlan writes. It not just a lyric—it’s a suggestion, a warning, a plea, a wish. This request is woven throughout Likewise, her forthcoming solo album, amidst dramatically shifting motifs. Some are jubilant, some are dreamy and abstract, and a few are sinister, but within each dark void that Quinlan explores, there is a light peering back at her.

Frances Quinlan has built an identity for herself over the past decade as the lead songwriter and front-woman of the Philadelphia-based band Hop Along, and her distinct voice is among the most recognizable and inimitable in music. While the band began as Quinlan's solo project (originally titled Hop Along, Queen Ansleis), Likewise is Quinlan's debut under her own name. To make the record, she enlisted the virtuosic skills of her bandmate Joe Reinhart, and together they produced the album at his studio, The Headroom, recording in stints over the course of a year.

“One of the benefits of experience in my case has been that I’ve become a stronger and more adventurous collaborator,” Quinlan states. “Working with Joe on this made me able to better see that the guitar is just one vehicle... there are so many others to explore.” With a renewed openness to explore different sounds, Quinlan supplements her typical guitar-based instrumentation with synthesizers, digital beats, harps, strings, and a wide variety of keyboards. The shifting and exploratory nature of these musical arrangements allow her lyrics and vocals—which have always been at the forefront of her music—to reach emotional depths like never before. Her vocal tones beckon a kaleidoscopic range of emotions across all nine songs on the album, from soft and ruminative to enraged and commanding; from conveying powerful messages to highlighting small, yet poignant, moments.

Quinlan is a voyaging songwriter. Throughout Likewise, she confronts what confounds her in the hopes that she will come out on the other side with a better sense of what it is to be human. She presents listeners with a complicated, albeit spirited vision of what it could mean to truly engage with another person, to give a small piece of oneself over to someone else without expectation. It’s no easy task, in fact, it’s likely to remain a lifelong effort. This sentiment can be heard on the album’s first single “Rare Thing,” about a tumultuous dream Quinlan had about her then-infant niece. She sings, “I know there is love that/doesn’t have to do with/taking something from somebody.” Through percussive shifts, rosy bass, and transcendent harps that echo the parting of clouds, Quinlan expresses both joy and sadness in the discovery that a better, and perhaps more generous, way to love exists.

The common thread that leads us through each chapter of Likewise is our narrator’s sincere desire for open dialogue, with both the listeners and the subjects of her songs. But, even when that open dialogue isn’t possible, and there is a missed connection, Quinlan’s tone refrains from being one of despair. The sublime and rollicking “Your Reply” shows Quinlan attempting to engage with tenderness, even when met with a palpable silence. “There can be a one-sidedness to even the most loving and rewarding relationships,” Quinlan says. “We will always have a part of ourselves we can’t or don’t know how to share. There are so many risks involved. Regardless, I think of this song as celebratory. If anything, the speaker is frustrated at coming so close to understanding another person completely, but perhaps only just missing the mark. But still what a gift that is, to come close.”

“I think we often mistakenly interpret love as being a power struggle. You can’t hear any other person but yourself with that structure in place. You get in your own way, you can’t empathize.”

Likewise’s artwork is Quinlan’s own self-portrait, capturing the singer in this specific moment in time, as she stares wide-eyed, both fearful of, and eager to be seen. But she’s ready to look directly into the darkness of the abyss, find the light and make the jump for human connection. “You don’t realize what you’re cheating other people out of by not being honest. I struggle with it, I’m sure I always will. We are torn between our love and our shame. But I think at least part of that comes from a desire to be better. That is a noble drive, one that makes me hopeful when I consider the possible future."

Put simply: “We should try again to talk.”